Summer Bucket List #1 - Take to kids to the Atlantic Ocean

I finally got around to taking the kids to the Atlantic Ocean for the first time (check that one of my summer bucket list)!  They've been to the gulf plenty of times, but since we moved to central Florida, we hadn't made it over to the coast.  So we went to Cocoa Beach yesterday! 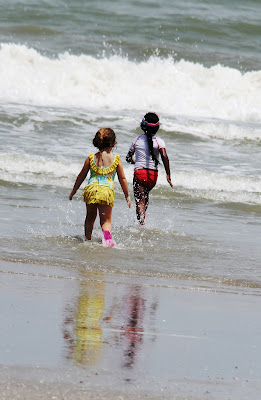 The sand was the hot, the water was perfect, and we even got some tropical storm-force wind-driven rain at the end of the day!﻿ 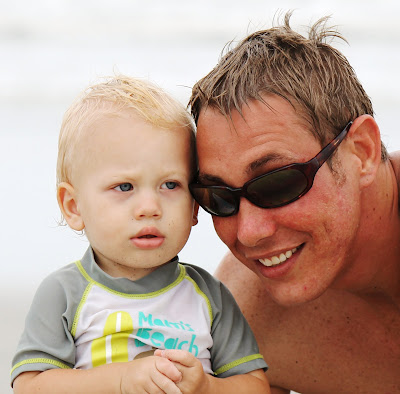 The guys (big guys, not my little guy) were in the water riding waves (yes, they still do that at 35), and us girls were on the shore when the inclement weather decided to pop-in.  It had been getting a little cloudy for a few minutes, but then the sprinklers started.

"No big deal", I thought.  Besides, we were in our bathing suits.  So we start to pack up the stuff.

Then the wind came.  Like 50 mph tropical storm winds. Growing up in Florida, I'm used to strong afternoon storms.  But this was seriously hurricane wind.  I look out into the water.  The guys don't even blink.  Was it the beer?  Or maybe the wave riding was that. much. fun.

The guys mosey on over (it was a mosey.)  By this time, it's raining, hard.  The kind of rain that hurts.  I hear Josh say, "We're in trouble" as they realize that we're struggling to get our valuables ($800 camera... check, iphone...check, Josh's prize sunglasses...whatever, I'll throw them in the back I guess.) out of the rain.

Then Josh does the unthinkable.  He grabs the sand-covered towel in the midst of the hurricane-force winds in the direction of little monkey's face!  And my eyes.  Sand in your eyes is only funny when you're laughing so hard because you feel like your 10 years old and on the the log plume ride at Disney World.

Thank goodness Omari had the sense to grab the baby and head for the car.  I don't think it ever occurred to Josh and I as I was trying to drag the cooler through the sand all my my lil self.

From now on, we're doing beach Sundays at the Cole house!  So fun!
Posted by Jamie at 7:42 AM